COMBAT KELLY
AND THE DEADLY DOZEN #1 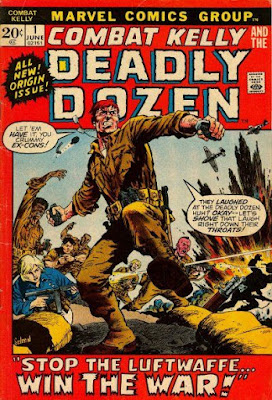 Welcome to the second edition of "Wayback Wednesday", where I take a look at some of the older comics in my collection that might be a little more valuable than my regular Longbox Junk, but would still be considered filler in the boxes of any SERIOUS comic collector.

This week, we're going to crack the plastic on the first issue of a short-lived Marvel series (9 issues) from the early 70's that seems to have been created based on the theory of "If this one thing is awesome, and so is this thing. . .then another thing combining the two will be TWICE as awesome!"

In Combat Kelly's case, the two awesome things they tried to combine were the long-running Marvel war comic "Sgt. Fury and His Howling Commandos" and the popular 1967 movie "The Dirty Dozen".  Unfortunately, it seems that the combination didn't work out so well, and Combat Kelly and The Dirty. . .er. . .DEADLY Dozen lasted only just over a year (it was a bi-monthly book).

So while Sgt. Fury and company went down in comic history as some of Marvel's most famous characters, Combat Kelly (which was actually spun off from an issue of Sgt. Fury and included a couple of characters from the title, and was even drawn by longtime Sgt. Fury artist Dick Ayers) is, from what information I can find on the internet, practically forgotten.

Let's take a look at the first issue, shall we?

After their first successful mission (led by Corporal "Dum-Dum" Dugan, of Sgt. Fury and His Howling Commandos in Issue #98 of that title) an outfit made up of a diverse mix of convicted military criminals is introduced to their new commander. . .Mike "Combat" Kelly, a boxer convicted of manslaughter after killing a man during a fight.

Their first mission under their new commander is to go behind enemy lines to destroy an advanced Nazi fighter and capture the scientist behind its creation.  The mission goes badly, with the scientist being killed and the team barely escaping with their lives after destroying the jet. . .

This first issue was a little hit and miss for me.  It's pretty straightforward in nature. . .the first half of the book is taken up with introductions to the team and their leader, and the second half with their first mission.  It's pretty briskly-written and is a quick read.  The characters are a mixed bag of multi-racial/cultural sketches with one characteristic each to define them.  Examples: An Asian who does not use contractions when speaking.  A down home country guy who loves country music.  A Native American with a mohawk that shoots a bow and arrow. . .so on and so forth.

The problem for me was that it was glaringly obvious that, even though this was a WWII book, it screamed "THIS IS FROM THE 1970's!" on every page.  From the jive-talking black guy with a 4 inch afro, to the long sideburns and shaggy haircuts of some of the other characters, to the female commando with her tied up shirt/ bared midriff look and constant cracks about the "chauvinist" behavior of the men.  The 70's feel of this book in both art and dialogue pulls it from the 1940's setting just as badly as Donald Sutherland's character and the God-Awful soundtrack of "Kelly's Heroes" does.

The art on this book is good, but not great.  It tells the story, but there really aren't any moments of brilliance to be found.  It's all very workmanlike. The coloring is a bit sloppy as well.  If I had to pick a single word to describe the art on this issue, it would be "Average".  The cover by John Severin, on the other hand, is spectacular!  If only he could have done the interiors.

Overall, despite this definitely being an artifact of its decade and having average artwork, I liked it. There were some good ideas in it.  The concept of an expendable commando team of convicts. . .a sort of WWII proto-Suicide Squad. . .may be derivative in hindsight, but it COULD have been great with the right artist and writer.  If this title were handled as its sort of own thing instead of being a cash-in spinoff attempt on the success of Sgt. Fury, it MIGHT have been more than a distant memory today.  Unfortunately,  it looks like Combat Kelly never really caught on with readers, so the series never got the editorial attention it needed to improve past its second hand beginnings it might have gotten over a longer run. 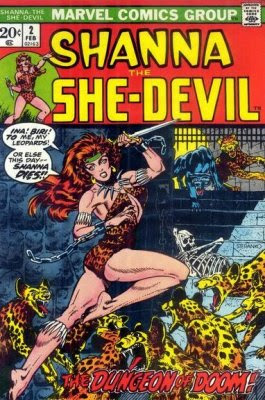 Over the past few months, I've rediscovered a love for older comics through a Facebook group I joined where anything past 1986 is only rarely discussed.  To thank that group, I've decided to start reviewing older comics once a week.

I can't really call them "Longbox Junk" because they tend to be a bit more valuable than the stuff I normally review (The issue pictured above is valued at around $40 or so in the condition it's in), but then again, most of the ones I own aren't going to be buying me a new house either. . .and truthfully, in the boxes of REAL collectors, even my more valuable comics would be considered Longbox Junk, just a little less junky than usual.

So let's get into the first non-Longbox Junk review.  The second issue of Marvel's short-lived Shanna The She-Devil series (Just 5 issues from 1972 - 1973), which was part of a Marvel initiative for female writers and comics aimed at a female audience.  Unfortunately, the initiative seems to have been a bit half-hearted. . .there were only 3 titles (Shanna, Night Nurse, and The Cat), and of the 3, only Shanna lasted 5 issues (the others only went for 4).

Shanna is enlisted by S.H.I.E.L.D. to stop a criminal named El Montano from hijacking a French rocket. She travels to his hidden fortress on the edge of the Sahara Desert, but is captured and must fight her way to freedom in order to accomplish her mission.
I actually knew nothing about Shanna The She Devil before reading this comic, but learned everything I needed to know about her through exposition as I read. You have to hand it to the writers of the Bronze Age, they were blunt, but subtle at the same time. . .at least in this case.
The story was well written and moved along quickly. Unfortunately, the plot itself was pretty ridiculous. . .a French moon rocket loaded with heroin being hijacked by a desert slaver? But that said, I still found the writing to be brisk and pretty good.
The line art and inking were very well done. . .giving Shanna the same almond eyes and lithe form that Ross Andru brought to the Diana Prince de-powered version of Wonder Woman.
Unfortunately, the coloring is a bit slapdash. It gets worse toward the end of the book, starting to get particularly sloppy starting with page 26. There's no color "credit" for this issue, and I can hardly blame them for not wanting one. To tell the truth, this would have been a VERY nice black and white comic.
The cover by Steranko was good, but not great. Definitely not his best work, but still an eye-catcher.

CONCLUSION
At the end of it all, coming into this issue with no knowledge of the character, an overall weak plot, and some sloppy coloring, I still found myself wanting to read more about her at the end of it. It's not the greatest comic I've ever read, but it had some brisk writing and great art.

Back to Longbox Junk as usual with Vertigo's 3 issue "Adventures in the Rifle Brigade: Operation Bollock"

WHAT THE HECK IS THIS ALL ABOUT?

Everyone that collects comics has Longbox Junk.  No exceptions.

Series, minis, random issues that you've picked up over the years that aren't really worth anything as far as monetary value goes, but there they are taking up space in your collection.  Longbox junk comes to us in many ways, but it's just not in the nature of the collector to toss comic books in the trash because they aren't worth anything.  And so they sit there. . .bagged and boarded in a lonely cardboard longbox prison. . .forgotten.
Until now!
Ladies and Gentlemen of the internet, I present myself to you as the champion of Longbox Junk!  I have taken upon myself the (sometimes not so great) task of digging deep into my comic collection to read and review all manner of Longbox Junk.
Yes, I realize this is a thing you never asked for.  Consider it my gift to you.  You're welcome.