Welcome to Longbox Junk, where I write comic reviews nobody ever asked me for!

I've been told that some of my reviews are getting a bit long-winded, so I'm going to TRY and keep things a little more on the short and sweet side (we'll see how long that lasts). Let's get right into it!

I DO love me some Mass Effect! It's one of my favorite video game series, and I play a LOT of video games.  I've always considered it to be the Star Trek game nobody has ever really managed to deliver.

This "mini-series" came out right before Mass Effect 3 as part of the massive hype behind the game's release as the final part of the first Mass Effect Trilogy. It's actually not so much a mini as it is 4 separate one shots loosely tied together by the Mass Effect theme, as the issues take place during various points over the timeline of all three games.

Did the comic books manage to capture the spirit of the hugely-popular video games? Let's find out! 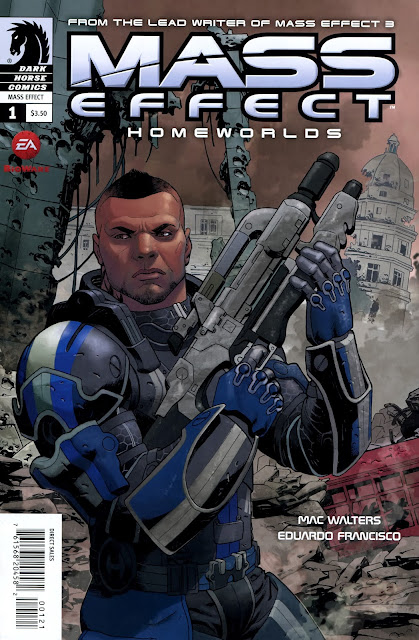 This first issue of Homeworlds takes place years before Mass Effect 1 and tells a story of James Vega (a no-nonsense Marine introduced as a new character in Mass Effect 3) before he joined the crew of the Normandy. This is a younger, more conflicted Vega trying to choose between his family and going into the service. 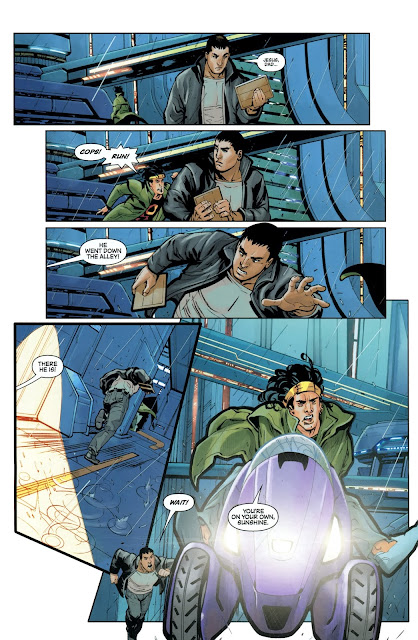 The story is pretty well written, but there's a lot of focus on action. . .the issue is basically one long chase scene after a drug deal gone bad. . .it does give a some insight into why Vega becomes the duty-driven Marine we see in Mass Effect 3, but it's almost an afterthought to the action. The light story and art that is decent but nothing special make this a pretty average comic. 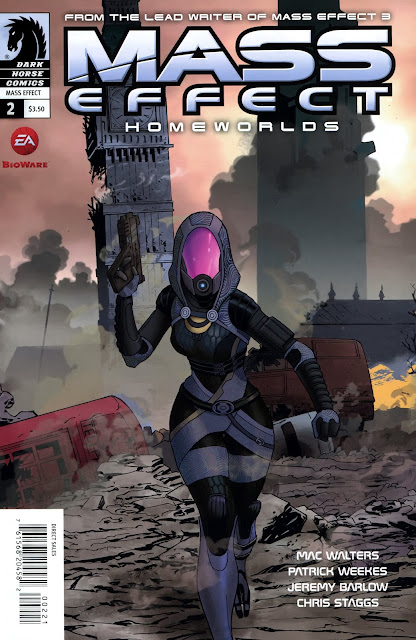 The second issue of Homeworlds tells us the story of Tali'Zorah nar Rayya and her companion, Keenah, in the events immediately leading up to the first Mass Effect game.


Like the first issue, this one is also pretty much one long chase scene as Tali and Keenah try to get some vital information that they've discovered to anyone willing to act on it, while being chased by a deadly assassin hired to stop them.

There were some decent story moments in here, particularly about the racial prejudice against Tali's people, but (like the first issue) what little story there was took a back seat to the action. A shame, because Tali was one of the more interesting characters in Mass Effect. 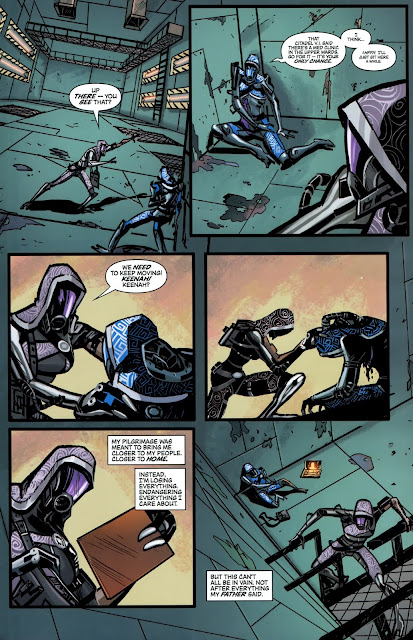 The art on this one is extremely stylized, with elongated, stretchy forms. I don't think it fits the material well. It looks like something from an indie book instead of a tie-in to a major game release. The strange art choice and extremely light story make this an average issue. It's a bit better than the first, but not by much. 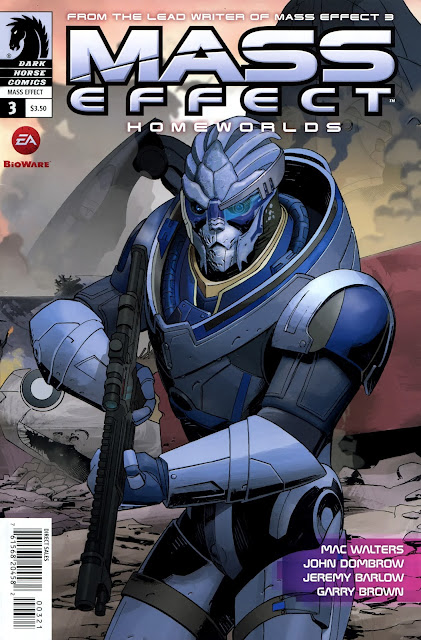 I really liked this third issue of Homeworlds, as it features one of my favorite characters, Garrus Vakarian. . .former cop, expert sniper, and all around alien badass. I had Garrus at my side through all 3 Mass Effect games. But really. . .who didn't?

Besides the general "Hell yeah" of an issue focusing on Garrus, the story here was a big win for me because it told the tale of just HOW Garrus (then known as the vigilante Archangel) ended up where Shepard found him on Omega station at one end of a bridge single-handedly sniping all comers from the other end. It was something that was never explained in the game (Mass Effect 2).

Turns out he didn't start out solo, but was part of a team of vigilantes. They were betrayed and ambushed. Garrus the last survivor. The story flashes back to his younger days and his demanding father, as well as during his time as a cop and discovering how little effect his by-the-book efforts had on crime. 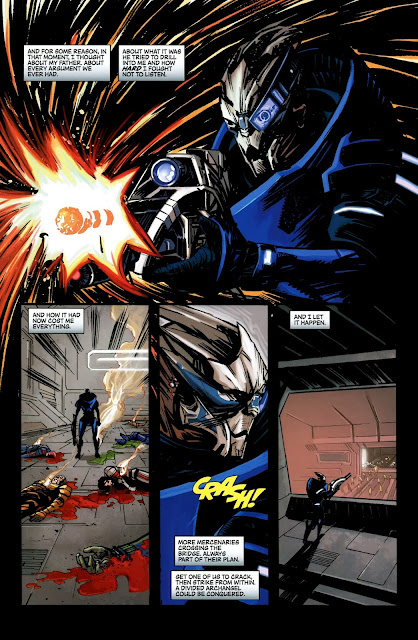 All in all, this was a great story that lived up to this series' promise of expanding the background of the Mass Effect characters. The dark, scratchy art isn't the greatest thing I've ever seen, but it fit the nature of this story nicely. All things considered, this was a great issue. 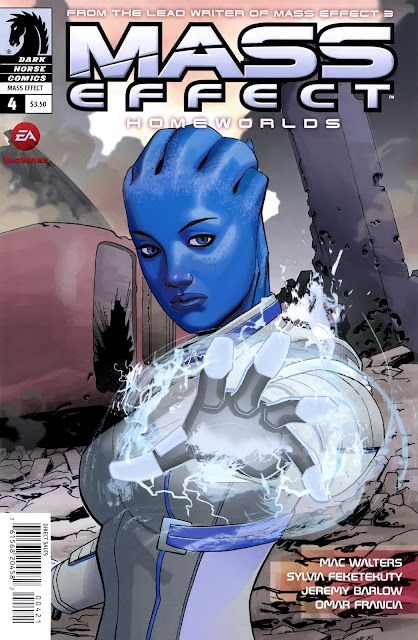 This closing issue of Homeworlds tells a story featuring Liara T'Soni immediately before the events of Mass Effect 3, explaining how and why she ended up on Mars during the first mission of the game.

The story is a bit muddled and unclear, and most of it is a sequence of chases and escapes from rogue agents of Cerberus trying to stop her from gaining the information she's looking for.

Like the first two issues of this series, it's a bit light on story, which is a shame because Liara isn't so much an action character as the others. She's a scientist, investigator, and information broker. It seems a waste to just throw her into a series of chase/fight/escape scenes and call it an expansion on her background. 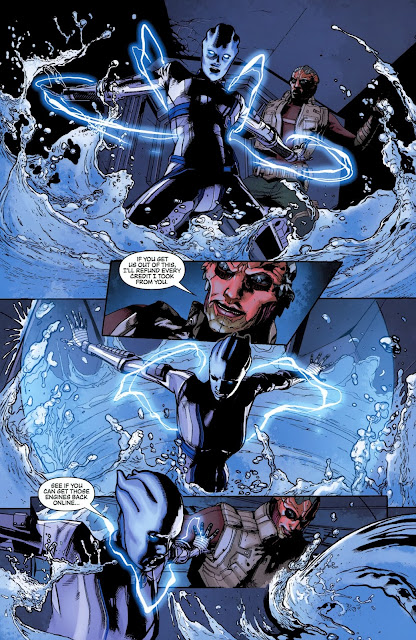 The art is pretty good, even if it makes Liara look meaner than she should be. All in all, the disappointing story makes this issue. . .like 3/4 of this series. . .average.

All in all, I have to say I was pretty disappointed with Mass Effect: Homeworlds. With the exception of the third issue, these stories were all pretty much chase scenes with a sprinkling of story on top.

None of the issues were BAD, they just could really have been much better. I'd still suggest it to fans of Mass Effect for those bits of story, and I highly suggest the third issue, but if you aren't already a fan of Mass Effect, don't even bother. You won't get the story connections and it will feel like a disjointed jumble.

ONE SHOTS! I DO love me some one shots!