Welcome to Longbox Junk, the comic blog stuffed absolutely full of reviews you never asked for!

One shots! I DO love the one shots!

I have a LOT of one shots in my collection. They're actually my favorite kind of comic book. Not that I mind following a favorite character month to month, but there's definitely something to be said for having a complete story in one issue. No cliffhangers. No waiting. One issue. . .that's it.

In my extremely humble opinion, the one-shot is a true test for comic book creative teams. They have very limited space to craft a complete narrative. Because of that limitation, one shots can be a bit of a mixed bag. Some teams simply aren't up to the challenge. Others manage to create often-overlooked nuggets of pure comics gold.

Let's take a look at this handful of one-shots and see what we get!  I'm still trying to keep things a little shorter, so I guess we'll see how that works out as well.  Ready? Let's do it! 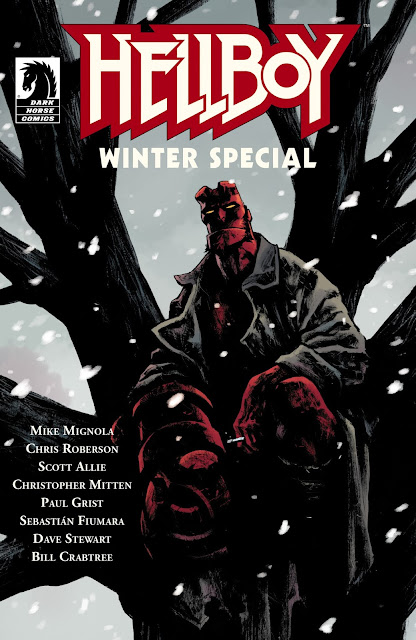 First off. What an absolutely fantastic cover! Definitely worthy of a turn on the rotating office wall comic cover display. It captures the spirit of Hellboy perfectly.

There are three short unconnected stories in this special, let's take a look at them individually. . .

This story doesn't feature Hellboy or any of the B.P.R.D. characters, but some characters I'm unfamiliar with who seem to be paranormal investigators in the 1800's (David Grey and Sarah Jewell). The art is very nicely done on this one, and the dialogue between the characters is snappy. The story is very short, but well written, and I wouldn't mind finding out more about these characters.

A tale set at Christmas in the 1950's starring Hellboy and Professor Bruttenholm versus a possessed Santa Claus. It's played for laughs and the art isn't great. . .very cartoony. I got a chuckle out of Hellboy getting an ugly sweater for Christmas, though. Probably the worst of the three. Still, not terrible.

Now HERE'S some good Hellboy. The classic team of Hellboy, Abe Sapien, and Liz Sherman tracking down some lost children and coming in conflict with a witch. The ending is a chilling reminder that when it comes to the supernatural, sometimes when you win, you still lose. The best of the bunch with a great story and great art by the same artist who did that fantastic cover.

All in all, I really enjoyed this one shot. The middle story was pretty light, but that didn't drag the whole thing down. I can heartily recommend this one, even if you aren't a big Hellboy fan. 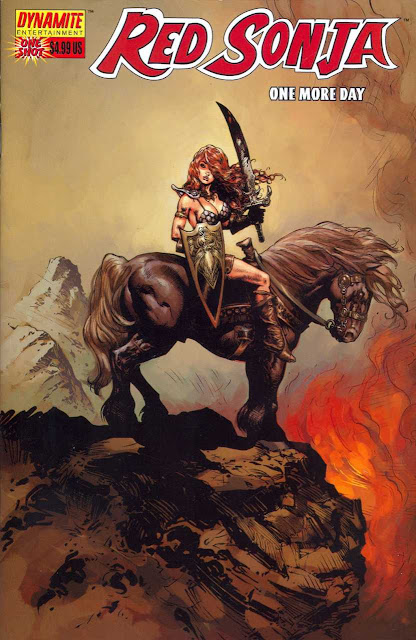 I REALLY liked the physical quality of this one shot. It's a heavy, thick book with a minimum of ads on good quality paper. Dynamite always knows how to put together a nice comic. The cover is a fantastic Frazetta homage that's almost worth the price of the comic alone!

The story is a simple, straightforward tale of Sonja repaying an old friend (now a king) a favor by helping defeat a rampaging army led by a brutal general. She demonstrates that it isn't always the strongest army that wins the day by leading them into a deadly trap instead of meeting them on the battlefield. I liked the simplicity of the story and how it took Sonja from her usual lone wolf adventures and put her in the position of being the leader of an army.

With the simplicity of the story, the art is the star of the show. From the beautiful cover all the way through to the last page. The artist DID seem to have some trouble getting a handle on what Sonja's face was supposed to look like (a bit inconsistent through the comic). But a small complaint like that won't keep me from highly recommending this fantastic one shot to any fan of fantasy comics.

Two for two good ones so far. Let's see what we've got next! 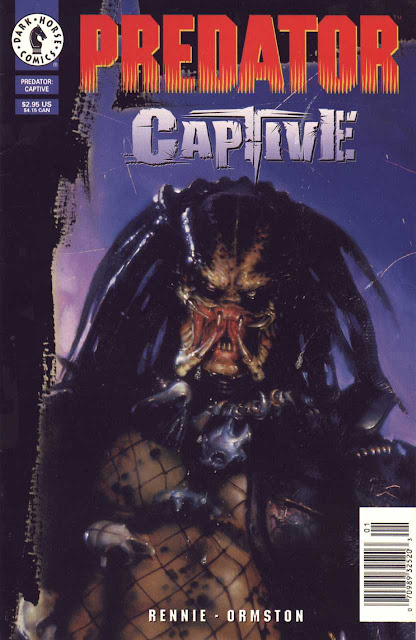 This one was REALLY good!

For starters, the photo-realistic painted cover is superb. The interior art is dark and heavily-inked. It reminds me a lot of Keith Giffen's earlier work. It perfectly fits the story and every panel on every page is fantastic.

The story is one of the best Predator tales I've read. I could easily see this one as a movie. Basically it's about the only Predator that they managed to capture alive. . .but are they studying it, or is it studying them?

All in all, from front to back, I found this to be a fantastic one shot. If you're a Predator fan and haven't read this yet, find it! It's a great little story.

Three for Three! So far, so good. 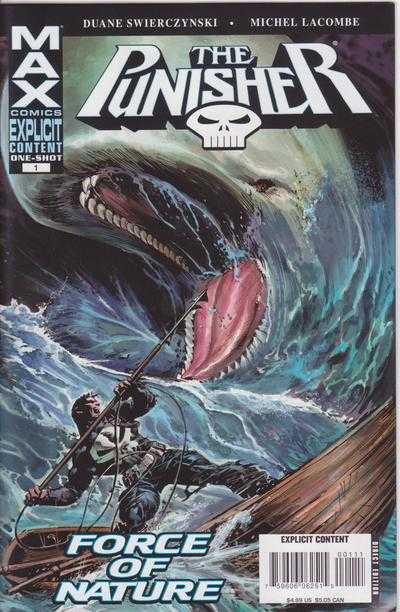 FORCE OF NATURE
SCRIPT: Duane Swierczynski
PENCILS: Michael Lacombe
Don't let the nicely-done, but somewhat ridiculous cover fool you. The story inside is actually a tense, almost Hitchcock-like "Lifeboat" story about 3 friends turning on each other after the Punisher carefully maneuvers them into position.

I liked that the story shows Punisher as a devious manipulator and that NO fish is too small for him. It did break down into violent Punisher business as usual at the end of things, but before that, it was a nice change of pace from the standard Punisher story.

The art throughout was generally pretty good, and reflected the tense psychological drama of a story that focuses less on violence than the usual Punisher story (at least until toward the end).

All in all, despite a somewhat predictable ending, this was a good read with an unusual story for The Punisher. It definitely earns its "Mature Readers" label for violence and language, but if you're a Punisher fan, that probably won't bother you. Ignore the cover that has nothing to do with the story and pick this one up if you spot it in the bargain bin. 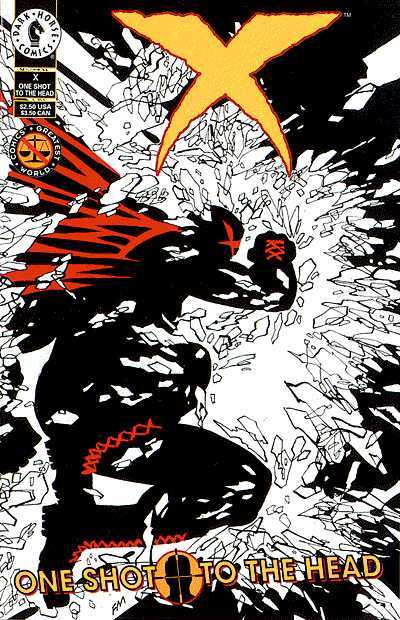 I had never heard of this character, not even sure where or when I picked up this one shot, but I was pleasantly surprised. It's actually pretty damn good (in a grim-n-gritty 90's way).

This comic doesn't do any favors as far as introductions go. It's not new-reader friendly at all. I had to hit the internet for info on "X", who seems to be a Punisher/Batman combo. The story is very simple, but nicely done, with the title character stalking and trapping a crooked politician.

The art is a bit schizo. . .the cover by Frank Miller (before he went insane) is absolutely fantastic! Then the front 2/3 of the book is "Meh" art with lousy colors. Then the last 1/3 switches to a different art team (same pencils, but different inker and colorist) and it's superbly done! The great Tim Bradstreet on inks for the back half definitely elevates things several notches.

All in all, I enjoyed this book. The art was hit and miss, but generally good. It was a lousy introduction, but enough of one that I want to dig up more "X" comics. Bad taken with good, I give this one an average score.

Overall, this was a great bunch of one shots. There's a few little complaints here and there, but really there's not a bad one in the bunch. There not being one truly BAD comic out of five is actually a very pleasant surprise, because it seems there's always ONE bad apple. Not this time!

Even better, not only isn't there any really bad ones to be found, there are a couple of truly excellent one shots to be found here! I can heartily recommend Red Sonja and Predator as fantastic examples of creative teams stepping up to the plate an hitting a home run!

Hellboy is ALMOST there, and still highly recommended. Punisher is good IF you're a Punisher fan. If you're not, then it's not going to change your mind. Lowest on the rung was X. . .and even that wasn't really BAD, it just had some art problems.

I like one shots. How about some MORE one shots?