Welcome to Longbox Junk, the place to find all the comic reviews you never asked for!

Join me as I continue to go through a hefty handful of random one shot comics from my collection. In the first part, I was pleasantly surprised to find not a bad one in the bunch. Sure, there were little gripes here and there, but overall I couldn't find much wrong with any of them.

Will my lucky run of winners continue? Let's find out! 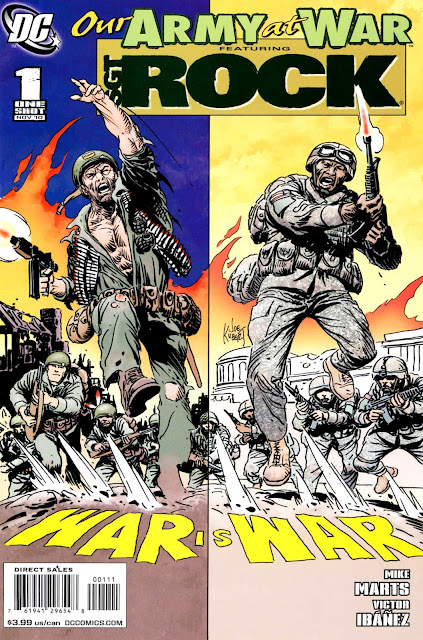 It is written to perfection with the story flashing back and forth between WWII and present-day Afghanistan, with the characters finishing each other's dialogue across time, showing the old soldier's adage "The more things change, the more they stay the same." to be true.

The ending of the story, when we find out why the modern character joined the military, is an emotional punch to the gut, and comes out of nowhere. I won't spoil it, but it's the kind of ending that puts everything before it in a whole new perspective. . .

The art is superb in every way, from the Japanese attack on Pearl Harbor, to the 9/11 attack on the Twin Towers, the whole issue is rendered in incredible detail. And then there's that fantastic cover by the legendary Joe Kubert! 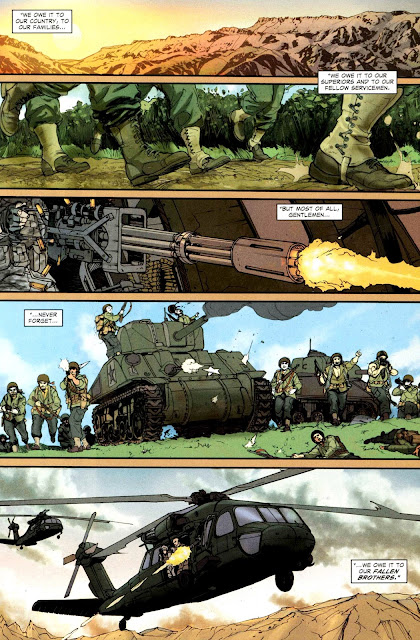 From the cover to the last page, this one shot delivers on every single panel!
Highly recommended for any fan of military comics. 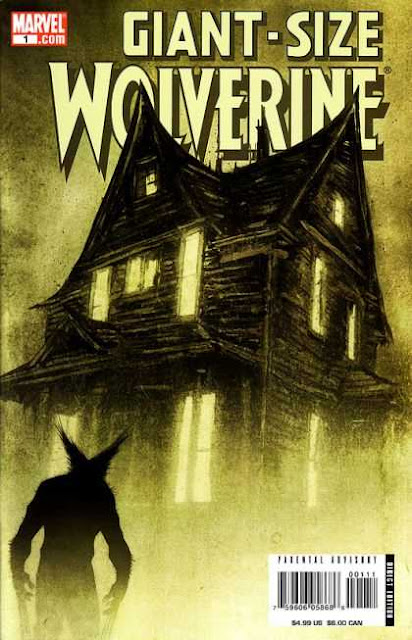 I'm not the biggest Wolverine fan, but I REALLY liked this story! Wolverine stumbles upon strange goings-on when he crash lands on an isolated farm outside of a small, superstitious town.

The dark and twisted art by Aja perfectly suits the "Backwoods Cthulhu" horror of this story, and the colors in sickly shades of brown and green really bring it home. 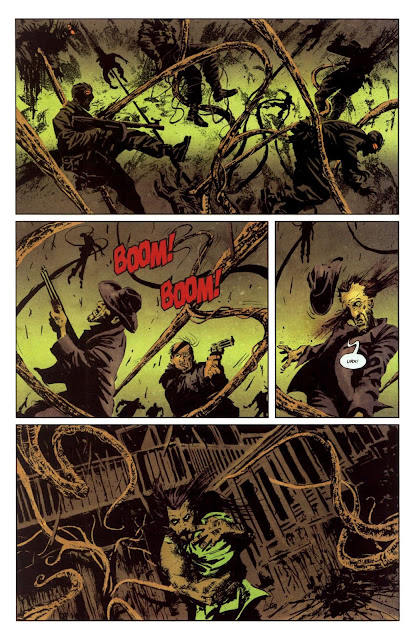 This is now officially one of my favorite Wolverine stories!
It's gruesome Lovecraftian horror with Wolverine in "Logan" mode. A real hidden gem!

Where the first part of this one shot was dark, moody, and horrific, the back 3/4 of the book is brightly-colored 90's superhero cliche to the hilt, with a giant cast of characters shouting exposition to each other.

I found it a bit hard to get through, and didn't really understand most of what was going on as it just sort of drops you into the middle of the continuity-dense X-Men saga. I don't understand the thinking behind including these reprinted issues. It's a complete disconnect from the first story in both tone and appearance.

The Jim Lee art is fine, in his signature 90's-Tastic way, so the reprint isn't entirely bad. It's just totally out of place. It feels like padding to justify doubling up on the price. I'm sure they could have found an older solo Wolverine story that would have fit better to reprint here. This just feels lazy. 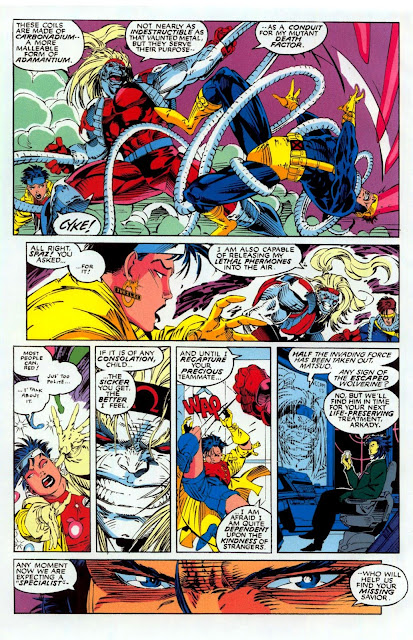 All in all, this one shot was half and half. A dark Wolverine story that is superb in every way, and a gaudy, wordy, 90's X-Men reprint. If it was JUST the first story, this would be a total winner. But as it stands, I'll just recommend this one for the first story. 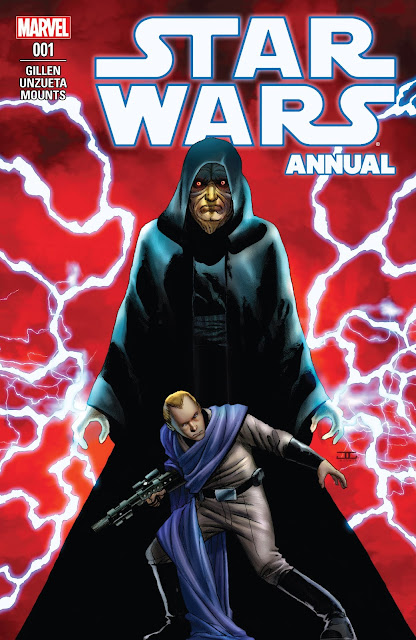 I really liked this story, which sits apart from the regular Star Wars continuity as a stand-alone tale.

It tells the story of a Rebel Spy who has been undercover in the Imperial bureaucracy on Coruscant for many years until he becomes involved in a desperate operation to save Imperial Senators sympathetic to the Rebel cause from the Emperor's wrath. . .not knowing he's been lured into a deadly trap. 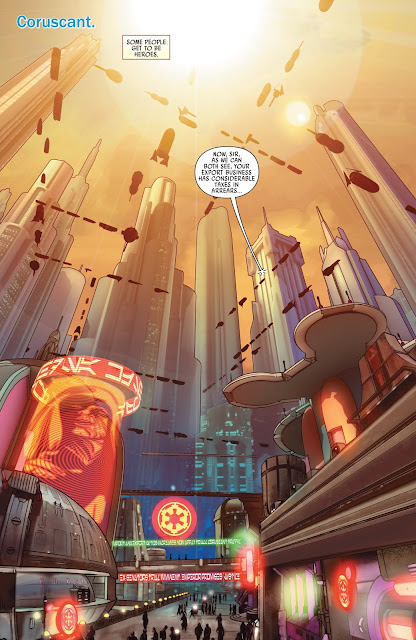 While the art is generally good, and even has a few really great moments (the awesome opening page shot above of Imperial Coruscant comes to mind), what elevates this story is that it completely flips the script and defies expectation in that not only is the hero unsuccessful in his mission, but he is played like such a chump by The Emperor, that his mistakes are devastating to the Rebellion.

I know, I know. . .the heroes are supposed to win against the odds. But there's a reason that Empire Strikes Back is regarded as the best Star Wars movie. The writer of this One Shot remembered why that is. . .Sometimes the bad guys win too. Very nicely done. Highly suggested for any Star Wars fan! 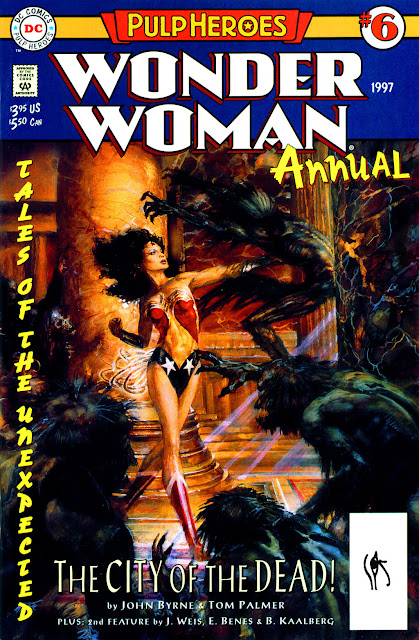 There for a while, DC was doing "themed" annuals. . .Year One, Elseworlds, etc.

This one was from one of the more forgettable years. "Pulp Heroes". To tell the truth, I see very little "Pulp" in this annual (compared to some of the others) and more "Two pretty standard stand-alone Wonder Woman stories" Let's look at them separately. . .

The first story is a tale of Wonder Woman as a young teenager on Themyscira discovering death and madness in Paradise as she accidentally causes the death of a friend, then descends to the "City of The Dead" to try and rescue her. 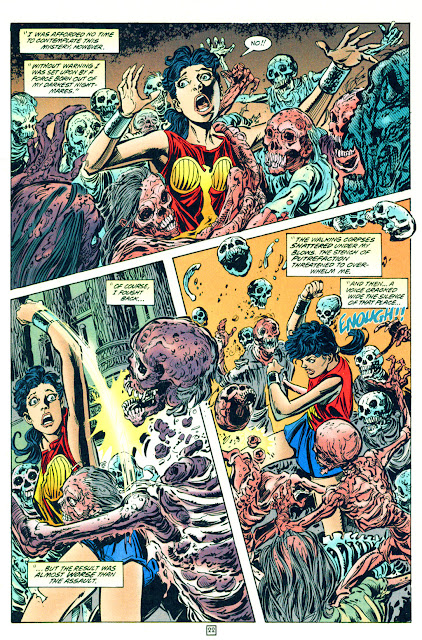 The story was a bit light, but interesting, and is backed up by some great Bronze Age throwback artwork. I did like that they decided to set the story in Wonder Woman's past, and that the villain was unexpectedly sympathetic. All in all, a pretty good story. 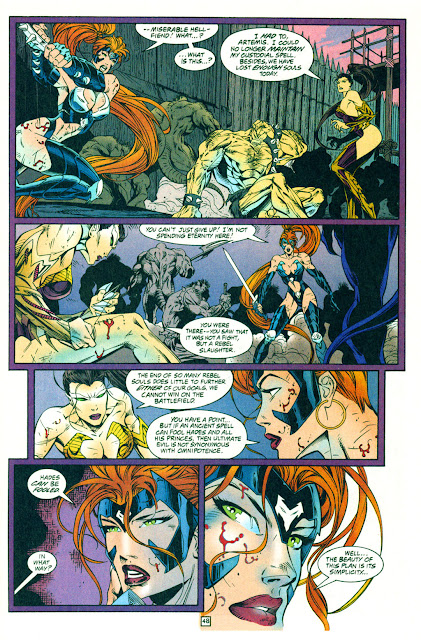 This one was full on 90's style "Bad Girl" violent cheesecake. The story was light and tacked on as an excuse for the fighting. The twist at the end was predictable. Ed Benes delivers a full-on 90's-Tastic artgasm that any fan of Jim Lee would be proud of. But at the end of the day. . .taken as a relic of the 90's, it's not too bad. It's one of those "So bad, it's sorta good" things.

Both stories taken together, this was a decent one shot. Nothing great, but not particularly bad. It's just a little odd that neither story fit the "Pulp Heroes' theme at all, especially when compared to other Annuals in the theme that year. So as pulp it fails. As a couple of decent Wonder Woman stories, it does okay. 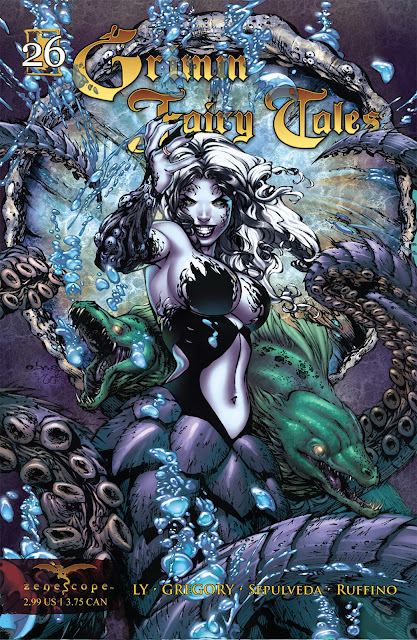 First, the good. . .the cover is awesome!

And that's about it.

The hefty one shot is a collected reprint story from the main "Grimm Fairy Tales" series (#25-26), and is a "Be careful what you wish for" tale set in two different intertwining times and places. . .a medieval fantasy kingdom and modern times.

The story itself is. . .okay. It's predictable and extremely light, but it's okay. Too bad that "okay" is where they got it to when there are FOUR(!) credited writers. I'm not sure there's an excuse for that.

The worst problem here is the extremely weak and juvenile art. It looks like something a high school student would draw to impress his friends. Everything looks sketchy and unfinished. Faces and hands are crude afterthoughts. The artist has a real problem with vehicles and backgrounds. The only thing he draws well are close up shots of female bodies. Anything past middle distance is pretty vague. 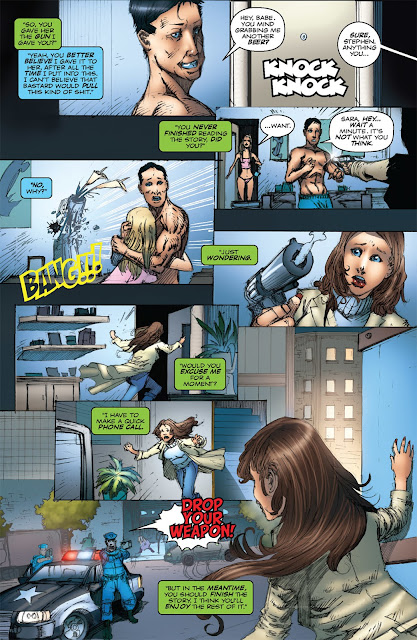 All in all, this is a borderline average story backed up with some pretty awful art. The whole thing reeks of cash grab. Like I said at the start, the only good thing about this one is the cover.

It's a bit more of a mixed bag for this handful of one shots, compared to the first. There were two outstanding examples of creative teams stepping up to the plate and hitting a one shot home run in Our Army at War and Star Wars Annual #1. . .both highly recommended if you should spot them in a back issue bin.

Wolverine had an excellent opening story backed up by a strange choice of reprints. Wonder Woman was pretty good. Not bad, but not great. Little Mermaid definitely stands out as the foul ball of this bunch with a weak story that took four people to write and art that's barely professional.

Let's step away from the one shots and take a look at a Batman/ Superman mini-series without Batman or Superman! Well. . .unless you count the giant Kryptonite-powered Batman/Superman robot that Gotham's substitute superheroes punch into submission at the end of things. . .BUT I'M GETTING AHEAD OF MYSELF!