Longbox Junk - The Brave and The Bold Part 1

That's right.  We didn't need fancy paper in my day.  And stories that made sense?  Didn't need those either.  You kids don't even know how good you got it now.  I had to buy MY comics from the grocery store.  One story in every issue.  None of that continuity crap you kids talk about.  Didn't need it. NOW GET OFF MY LAWN! 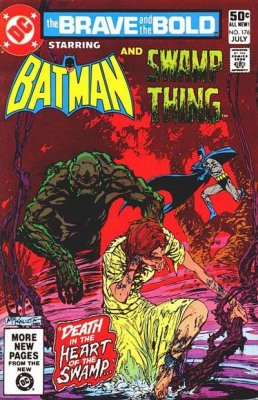 Batman and Swamp Thing accidentally cross paths in the Louisiana Swamp when Batman discovers that Selina Kyle's Sister, Felicia (in her only appearance. . .or mention. . .ever) is in danger.

Overall, I feel that this is one of the better issues on the back end of Brave and Bold.
The cover by Kaluta is great, for starters. The interior art by Aparo is pretty good. The colors are a bit dodgy, but hey. . .80's right? The story is a bit convoluted, but really written quite well. It's more thoughtful and grim than one would expect to find in a mainstream 80's superhero team up book.All in all, this is a good example of when this title got it right. Nicely done. 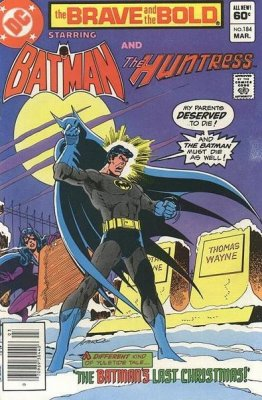 This Christmas issue teams up Batman and Earth-2 Huntress (Helena Wayne), putting Bats into a somewhat awkward and confusing father/uncle/partner position. When Batman finds evidence his father was actually bankrolling mobsters, he decides to quit being Batman, leading to some scenes of sad Bruce Wayne trying to party it up, but failing. Eventually (of course) Huntress helps him find the truth and Christmas is saved! YAY!Overall, this was a pretty good issue. The cover is basically pre-internet clickbait, which makes it sort of awesome. The interior art is better than I usually expect from Aparo, and the whole concept of Earth-2 is nicely summed up in a page or two where today an entire issue would be needed. All in all, this was a pretty good issue. Not great, but not bad at all. But someone needs to get Huntress a coat for Christmas if she's gonna be swinging around Gotham in the snow wearing a purple swimsuit. 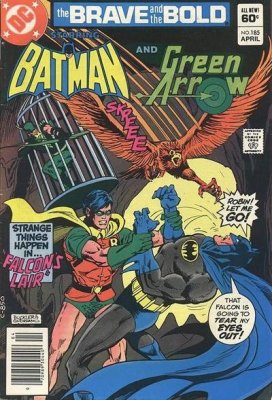 Green Arrow and Batman team up to take down Penguin after he tricks them both like chumps with his previously-unknown (and never mentioned again) ability to create perfect robot versions of Black Canary and Robin. Who knew?

Okay. . .this one was pretty bad.Bad cover, bad interior art, ridiculous story, just. . .bad.
This issue is a perfect example of how wrong this title could go. Moving along. 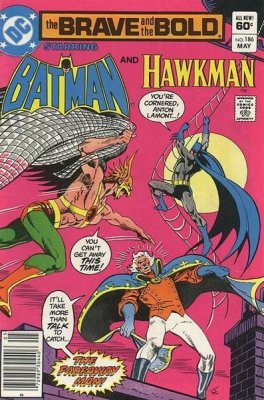 
Batman and Hawkman provide an outstanding example of using too much power to solve a problem when they team up to take down C-List antiquities thief Fadeaway Man while completely ignoring the Penguin standing right there!

Another pretty bad one.Glaring pink (PINK!) cover. Extremely contrived team-up. A weak villain who didn't really need both Hawkman AND Batman to bring down. A ridiculous scene of Batman ripping off a mask to reveal he's wearing his complete cowl beneath it.  And okay. . .speaking of Bats and his miraculous mask, let's talk about Aparo a minute. Can we just say it? Except when someone is wearing a mask, everyone looks the same. You literally cannot tell the difference between Carter Hall and Bruce Wayne in this issue. Please don't tell me I'm the only person who has ever noticed this.

This first batch of Brave and Bold was hit and miss.  And when it misses, it misses big.  It's almost hilarious how bad issues 185 and 186 are.  Of course, you can't expect the bar to be TOO high on what was pretty much the 80's printed version of shovelware social media games. . .newsstand clickbait meant to gather money from kids who haven't learned the difference between good and crap yet.

More Brave and Bold.
Batman teams up with Joker, Superboy, I. . .Vampire, and Ragman.